(MISSISSAUGA ONT.)— Subaru fans in Canada will soon have the opportunity to join an exclusive club when the 2018 BRZ tS goes on sale early next year.

Limited to just 100 units Canada-wide, the tS — short for “tuned by STI” — represents a new level of performance for Subaru’s modern take on the classic sports car. Renowned for its ultra-low centre of gravity and precision handling, the BRZ was ideally suited to become the second vehicle in Canada to bear the vaunted STI insignia.

“The BRZ has always been about the thrill of the drive, and this new special edition model takes that concept even further,” said Subaru Canada, Inc. president, chairman and CEO Yasushi Enami. “This is the ultimate expression of driving enjoyment the Subaru and STI brands have been built on.”

In a similar way that the WRX STI symbolizes enhanced engine power and performance compared to the already-potent WRX, the tS grade is considered a model for enhanced handling and response over the base model. As such, the 2018 BRZ tS builds on the excitement offered by the BRZ with a particular focus on improved driving dynamics.

The new BRZ tS adds STI-tuned front and rear SACHS dampers and coil springs, as well as flexible V-bars in the engine compartment, and new draw stiffeners to the chassis and sub-frame to improve steering response. The BRZ tS is also equipped with 18-inch STI alloy wheels, the first time that a BRZ has been offered with 18-inch wheels, wrapped in 215/40 R18 Michelin Pilot Sport 4 tires for superior grip and quicker turn-in. Brembo brakes at all four corners round out the package.

Helping it stand out from the crowd is an aggressive new look courtesy of an exclusive STI carbon fibre rear spoiler that’s manually adjustable to fine-tune rear downforce, and STI front, rear and side underspoilers helps control airflow for better traction and stability.

The BRZ tS is also adorned with an exclusive Cherry Blossom Red accent around the front grille and unique rear bumper cover. The rear trunk lid displays the official BRZ tS badge. The exterior foldable mirrors, roof-mounted shark fin antenna, BRZ and Subaru badging all have a black finish. The coupe’s also features a front fascia that is exclusive to the tS model.

The cabin features red accents throughout, while the black leather and Alcantara seats have red leather bolsters and the seatbacks are embroidered with the tS logo. Completing the revised look inside are red front seatbelts and a frameless rear-view mirror. 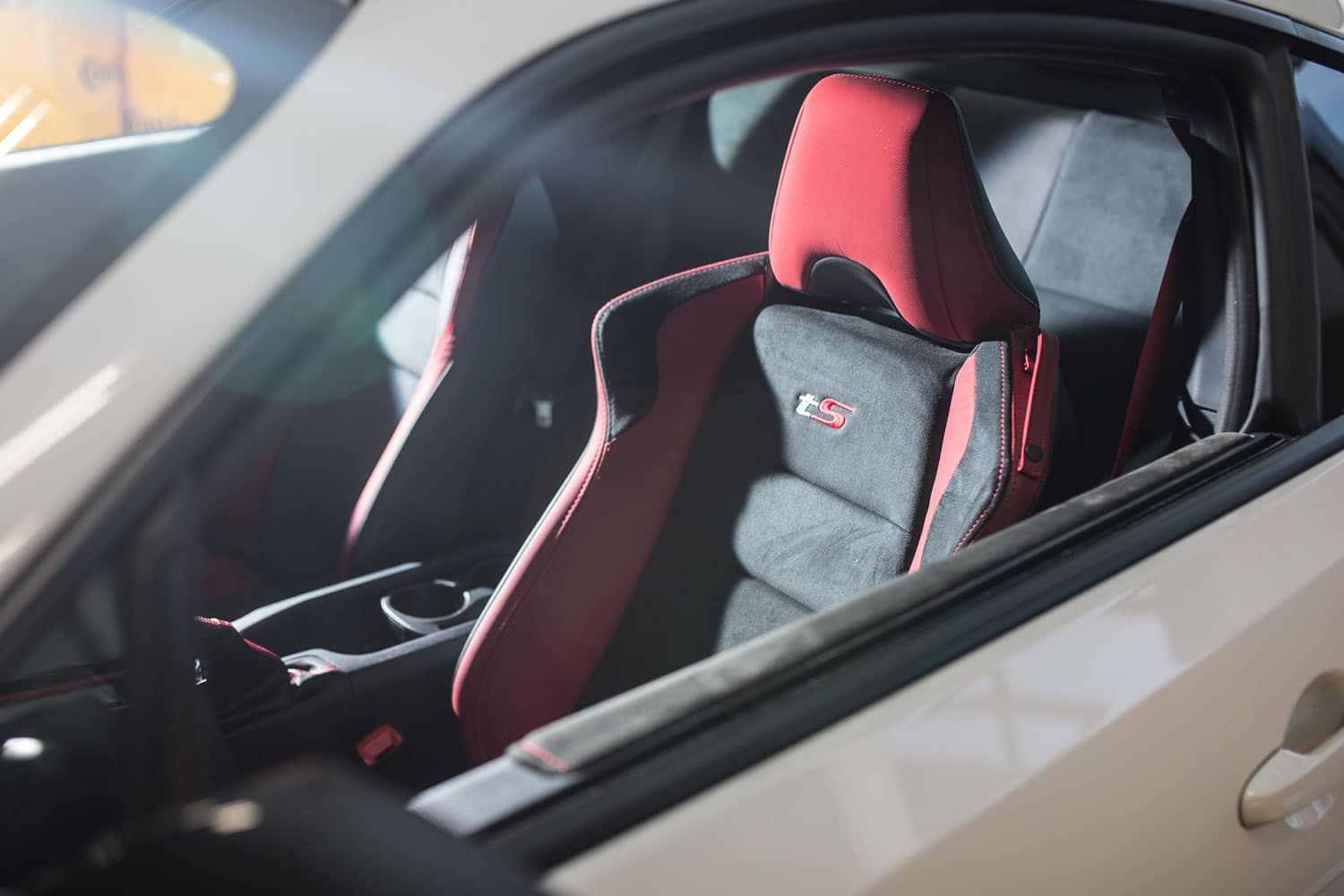 Under the hood is a high-revving 2.0-litre SUBARU BOXER four-cylinder engine that makes 205 horsepower and 156 lb-ft of torque. The engine comes exclusively mated to a six-speed manual transmission.

The Subaru BRZ tS will be available in World Rally Blue Pearl, Crystal Black Silica and Crystal White Pearl exterior colours when it hits dealerships early in the new year. It will carry an MSRP of $37,395.